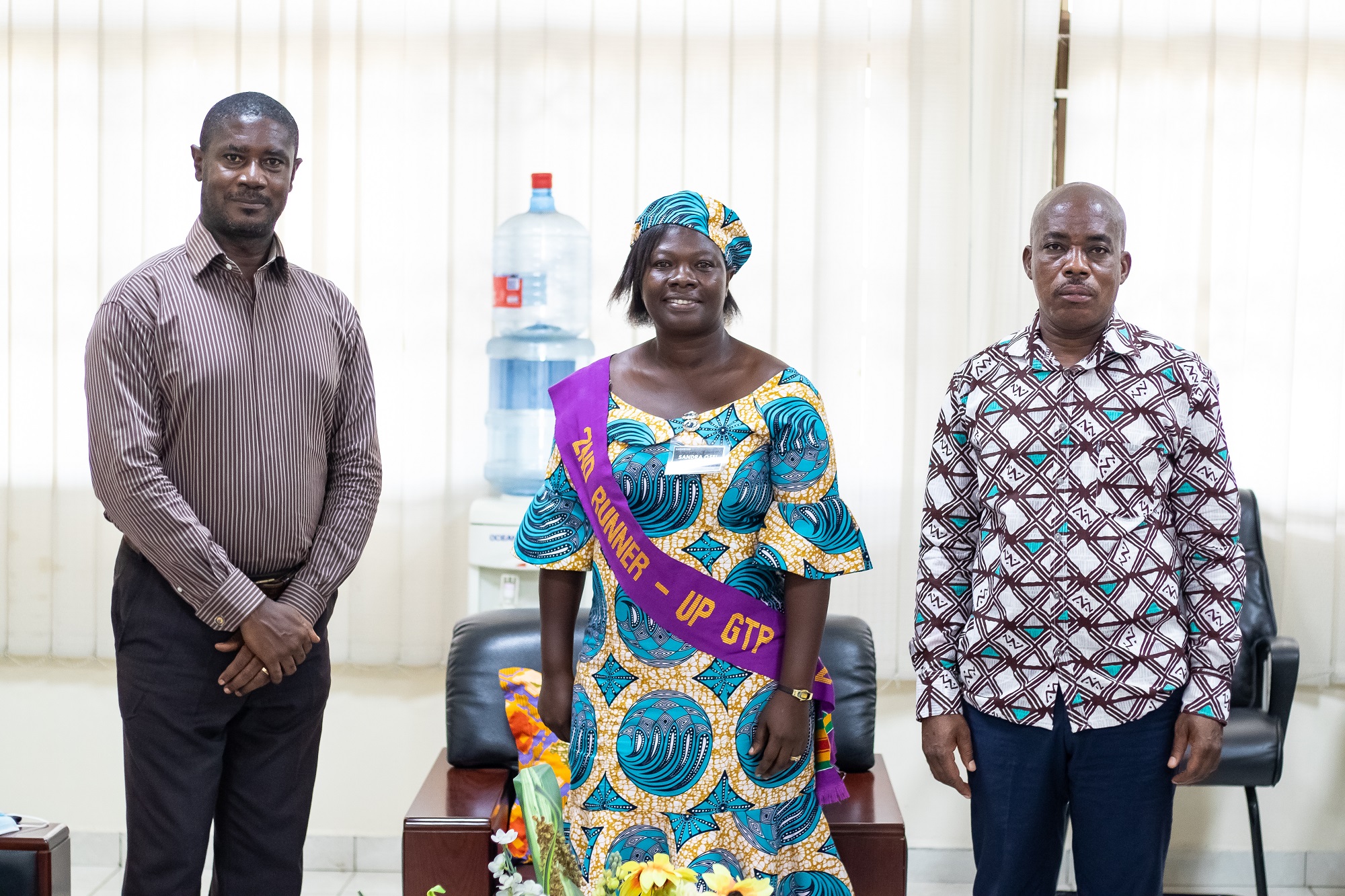 The Second Runner-up in the 2020 Ghana Teacher Prize Award, Madam Sandra Osei has visited the Akenten Appiah-Menka University of Skills Training and Entrepreneurial Development (AAMUSTED), formerly the Kumasi and Asante Mampong Campuses of the University of Education, Winneba (UEW), her alma mater, to show appreciation for the quality training she received from the latter.  Mainly, she attributes the award to the training she received from AAMUSTED. She did her entire post-secondary education – Certificate in Education, Foundation in Fashion and Textiles; Bachelor of Science (Fashion Design and Textiles Technology; Master of Technology (Fashion Design and Textiles), and Diploma-in-Education, – at AAMUSTED, formerly Kumasi Campus of the University of Education, Winneba (UEW).

Subsequently, on February 4, 2021, she visited AAMUSTED to show her prize to members of the University Community and thank them for the various ways they contributed to her training into a professional teacher worthy of national recognition and award.

He noted that winning such a national award was a clear indication of Madam Osei’s excellence, hard work, and uniqueness in the profession she had found for herself and hoped that her colleagues and students of AAMUSTED would emulate her.

Prof. Sarfo stressed on the uniqueness and appropriateness of AAMUSTED for quality training. He also alluded to the fact that all the University’s Lecturers are professionally-trained educationists with unique pedagogical acumen compared to lecturers in some other universities.

“Therefore, we can help you to develop expertise in key relevant areas to guarantee you success in the world of work besides enabling you to create your business after school. Madam Osei, you are a good example of what we are,” he said.

Meanwhile, he advised Sandra to pursue further studies since there was no limit to professional development. He said AAMUSTED would be happy to open its door to her should she decide to return for training to the Doctor of Philosophy (Ph. D) level.

Prof. Sarfo also encouraged Madam Osei to take advantage of the position she had attained to motivate others in the teaching profession and also to devote herself to mentoring the youth to become productive citizens. “You will learn better when you teach others,” he assured her.

When she called on the Acting Registrar of AAMUSTED, Mr. Michael Kofi Adu, in his office, he expressed happiness that Madam Osei, by her feat, had boosted the positive image of AAMUSTED and sent its name abroad.

He hoped that AAMUSTED students would follow in the footsteps of Sandra by working hard to merit national and international awards.

The Faculty of Vocational Education (FVE) in AAMUSTED welcomed Madam Osei to their Faculty Board Meeting, where her Lecturers highly praised her for making them proud.

Dr. Josephine Ntiri, Head of Department for Fashion Design and Textile Technology Education, was not surprised about the feat that Sandra had chalked. She testified to the seriousness that Sandra attached to her work as a student and life in general. She indicated the Department’s readiness to support Sandra if she decided to take the next step in her academic life.

Dr. Ellen Olu Fagbemi, her thesis Supervisor, asked her to use the award to encourage her colleagues to do hard work, whereas Dr. Doreen Dedo Adi, another Lecturer, was happy that Sandra had returned to her alma mater to show appreciation for all the efforts that her Department and the University in general had to put into her grooming to make her an exceptional professional.

Dean of FVE, Dr. Gilbert Owiah-Sampson said Sandra’s return to AAMUSTED would give members of the Faculty an added impetus and the morale to work harder at helping the students.

The National Teachers Council (NTC), in collaboration with the Ghana Education Service (GES) and the Ministry of Education (MoE), has instituted the Ghana Teacher Prize (GTP), formerly the National Best Teacher Award, to reward hard-working and high-performing teachers to inspire hard work in the teaching service of Ghana.