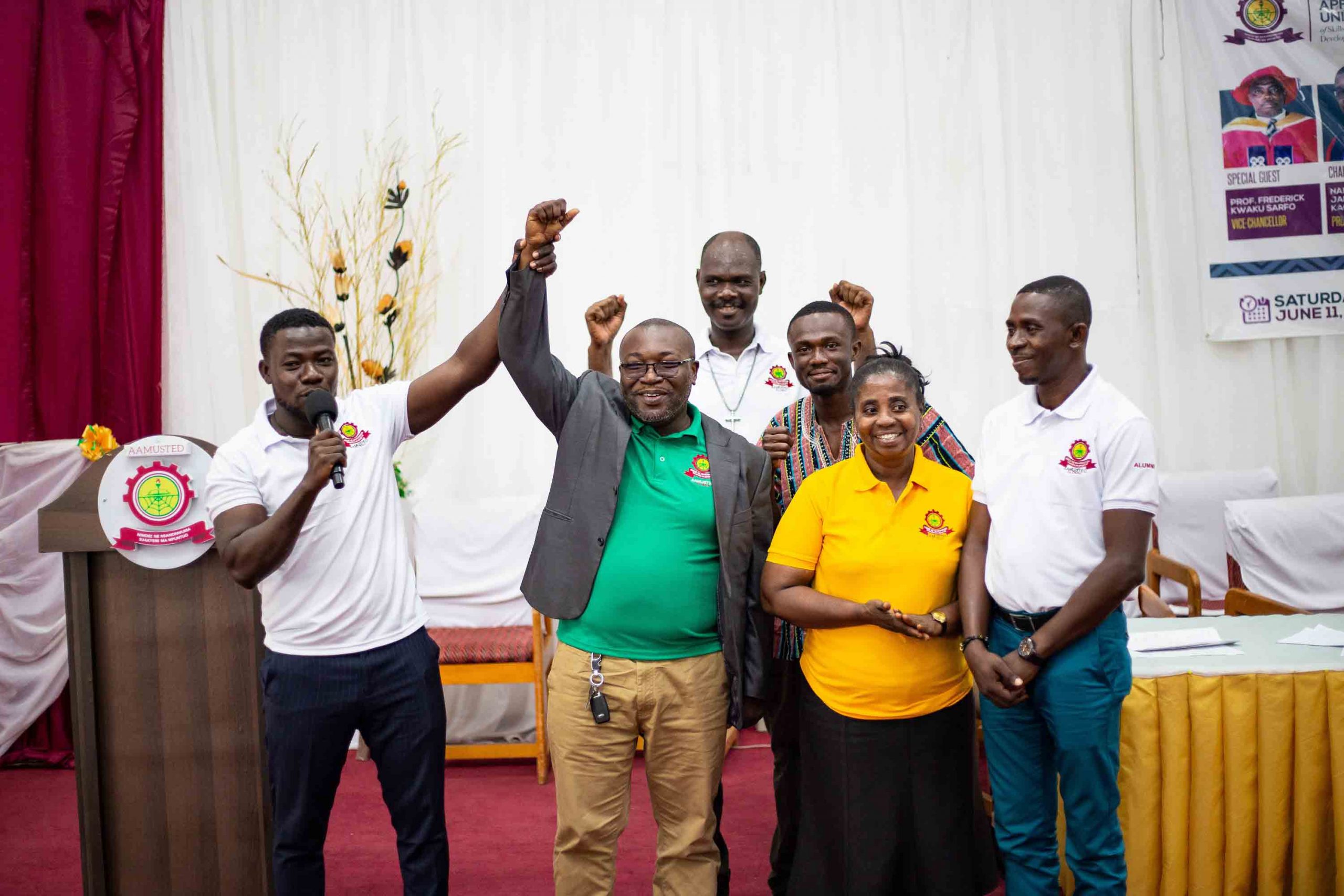 The Alumni Association of the Akenten Appiah-Menka University of Skills Training and Entrepreneurial Development (AAMUSTED) successfully held its first National Congress at the main campus of the University, Kumasi, on June 11, 2022. It was under the theme – “Realising the Mission and Vision of AAMUSTED – the Role of the Alumni.”

All Postgraduate, Graduate, Diploma, and Certificate holders, who completed academic programmes at the University (including KATTC, UCEW-K, UCEW-M, COLTEK, CAGRIC, AAMUSTED, and affiliate institutions, as listed and recognized by the University), are eligible to join, per article three (3) of the Association’s Constitution.

Hundreds of enthusiastic people, including heavy-weights in academia, politicians, and others from varied career persuasions, thronged the New Auditorium of the University for the National Congress, climaxing with a peaceful election of the national pioneer executives of the Association.

Dr. Kwame Ansong-Gyimah, a Senior Lecturer at the Faculty of Applied Sciences and Mathematics Education (FASME) of AAMUSTED, was elected the first National President. He received an overwhelming endorsement from members, polling 97.5% of the total valid votes cast in the elections. He was unopposed.

They shall serve a two-year term, after which they shall be eligible for re-election into the same position for another two-year term.

Following their immediate swearing into office by the Chairperson of the  Association Judicial Committee, Lawyer Mrs. Gertrude Acheampong, the National President, on behalf of all the executives, thanked members for the overwhelming confidence they had reposed in them by the massive manner they voted for the executives.

He commended the outgoing Interim Executive Members, led by the Assistant Registrar, Mr. Abraham Attoh, for their dedication and hard work. He acknowledged all their sacrifices to overcome the many challenges they encountered along the way and rallied their support towards the future development of the Association.

The Congress Planning Committee Chairman, Prof. Yarhands Dissou Arthur, expressed gratitude to members for turning out in their numbers for the Congress. He said, judging from the number of attendants and smoothness with which the Congress panned out, the future looked bright for the Association and AAMUSTED.

Prof. Arthur expressed gratitude to the Vice-Chancellor of AAMUSTED, Prof. Frederick Kwaku Sarfo, and former Ghana High Commissioner to South Africa, His Excellency, Dr. George Ayisi Boateng, an alumnus, for the nuggets of wisdom and insights they shared at the Congress. They were the Special Guest and the Guest of Honour, respectively.

The Dean of Graduate Studies, AAMUSTED, Professor Stephen Jobson Mitchual, represented the Pro-Vice-Chancellor of AAMUSTED, Prof. James K. Kagya-Agyemang, as Chairman of the Congress. There were several management members, including the Acting Registrar, Mr. Michael Kofi Adu, Deans of Faculty, Heads of Department, and teaching and non-teaching staff of AAMUSTED.