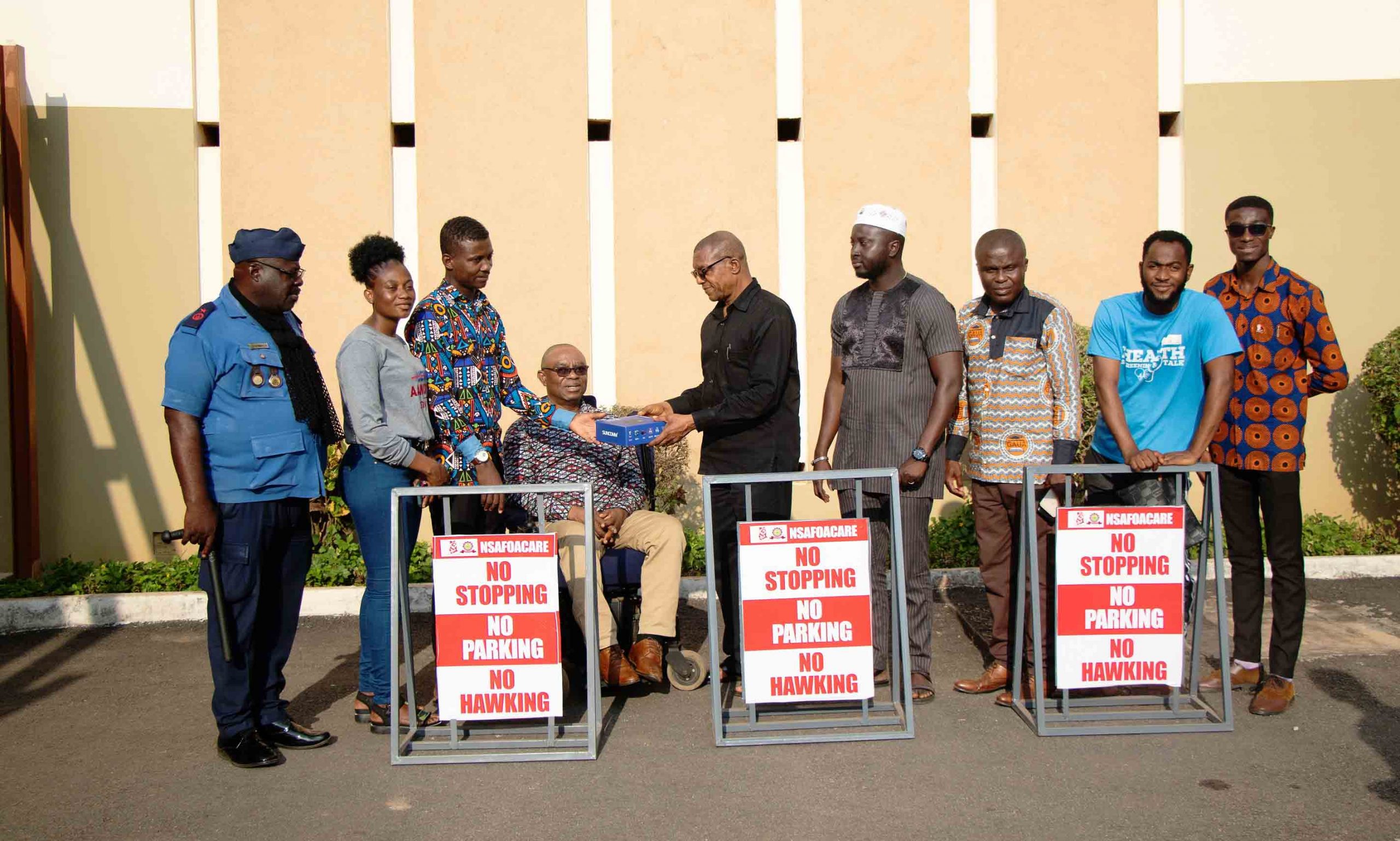 At the instance of the National Union of Ghana Students (NUGS) Chapter of the Akenten Appiah-Menka University of Skills Training and Entrepreneurial Development (AAMUSTED), a final-year student of the University, Mr. Yaw Obeng has fabricated relevant road signage to help students use the busy Kumasi-Sunyani Highway more securely.

The leadership of NUGS had been looking for a way to support the University Management in its efforts to ease the dangers associated with using the highway, particularly at the entrances to the University, following the rising incidents of indiscriminate hawking and the illegitimate stopping and parking of vehicles in the immediate surroundings of the University.

NUGS contracted Mr. Boateng to fabricate the unique mobile ‘NO HAWKING,’ ‘NO STOPPING,’ and ‘NO PARKING’ metal signage. The idea is to display them along the highway immediate to the University as a crucial step towards forestalling the problem. AAMUSTED is at Tanoso, off the Kumasi-Sunyani Highway in the Greater Kumasi Area.

On July 27, 2022, the leadership of NUGS officially presented three of the signage to the Management of AAMUSTED for use to support smooth commuting along the highway to and from the University by students and other users.

The Acting Pro Vice-Chancellor of AAMUSTED, Prof. James K. Kagya-Agyemang, who received the signage, commended NUGS for the initiative, acknowledging that using the highway got a bit challenging for commuters, especially during rush hours. He said that was why the AAMUSTED Management made efforts to get traffic lights installed along the road close to the University.

“This signage would further prevent the indiscriminate stopping and parking of vehicles, especially at the entrances to the University, and save the obstruction to smooth movement of vehicle and pedestrians,” he observed.

He assured the NUGS executives that the University would take the necessary steps to seek clearance and proper direction from appropriate quarters to mount the signage as quickly as practicable to help the University.

He was happy that NUGS contracted a student of AAMUSTED to fabricate the signage, saying that gave meaning to the mandate of the University to produce entrepreneurs.

For his part, the President of NUGS, Mr. Emmanuel Nsafoah, emphasised the mandate of NUGS to support the social wellbeing and security of students and thus, taking the initiative to augment management’s efforts to provide for the safety of students was just a matter of course.

He said being able to contribute to the solution of challenges in the University was fulfilling for the NUGS leaders, seizing the opportunity to highly commend Mr. Yaw Boateng for his excellent work on the signage.

According to him, the NUGS leaders for the 2021/2022 academic year had been devoted to various projects to support students. Among them, he mentioned the occasional provision of eatables to students living with disability and establishing a link with the A-Plus Laundry Company to wash the clothing of such students for free.

Again, he said the NUGS renovated the Banahene Pavillion, a leisure area for students on campus, and provided four leisure benches, which were yet to be mounted at vantage points on campus to boost students’ social life.

As his tenure as NUGS President drew to expiration, Mr. Nsafoah expressed the hope that his successors would take a cue from the good works done and continue to improve conditions for students.

At that same ceremony, the NUGS Executives also presented a GSM Suncom Wireless Phone to the University to be used at Mynd FM, the campus radio station.