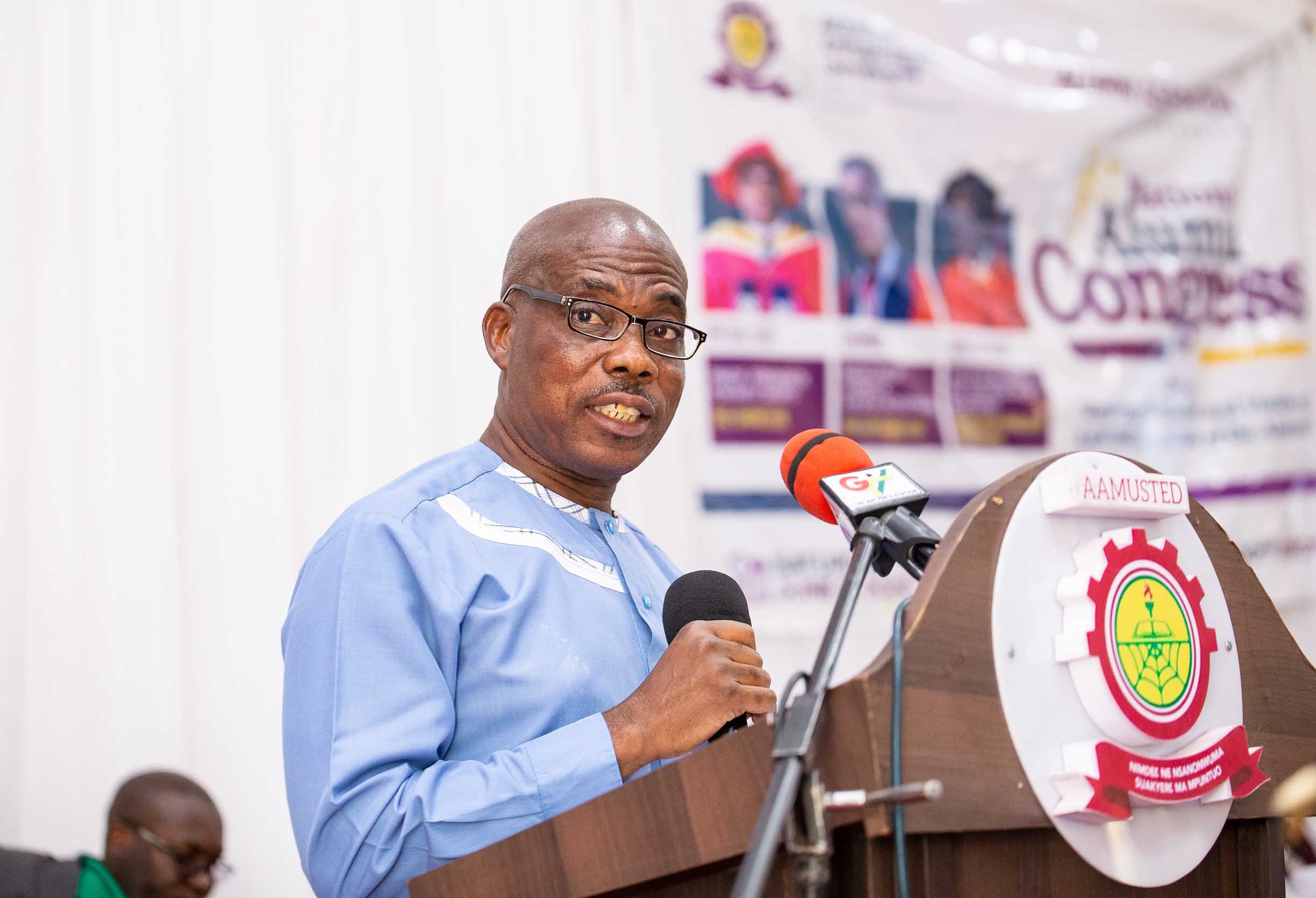 The Vice-Chancellor of the Akenten Appiah-Menka University of Skills Training and Entrepreneurial Development (AAMUSTED), Prof. Frederick Kwaku Sarfo, has indicated in the strongest terms yet, the University’s backing of the establishment of the AAMUSTED Alumni Association.

Addressing the first AAMUSTED Alumni National Congress in Kumasi on June 11, 2022, the Vice-Chancellor expressed joy over the eventual formation of the Association, stressing that it would find a place in history as a valuable achievement of the University.

Prof. Sarfo’s comments followed a seeming misunderstanding over the eligibility of past students from the Kumasi and Asante Mampong Campuses before their conversion to AAMUSTED to constitute the Alumni of the University.

In his view, nobody needs to worry over such a matter. Ghana’s constitution, he said, provides for freedom of association, and therefore, to the University, it is immaterial what time a person came in or left the two campuses of AAMUSTED.

“What is important to us is your willingness to associate with your alma mater and your desire and determination to join forces with us to seek the University’s development for the good of Mother Ghana,” he stressed.

Particularly, to those who received a University of Education Winneba Certificate, Diploma, or Degree after training in the Kumasi and Asante Mampong Campuses, he asked them to take pride in associating with AAMUSTED.

He explained that, after all, their admission letters clearly indicated their admission to the Kumasi or Asante Mampong Campus, where they, indeed, spent the entire duration of their respective programmes, using the available facilities and resources and groomed by the competent lecturers and administrative staff there. “Even after graduation, if you ever need an academic document like an attestation, transcript, a recommendation letter, or any such assistance, your destination could only be the Kumasi or Asante Mampong campuses,” he added.

The Vice-Chancellor said the Governing Council, Management, the entire staff, and students of the University were proud of the Association Members for being resolute not to betray AAMUSTED.

He assured them that belonging to the AAMUSTED Alumni Association would be mutually beneficial, indicating, for instance, that Alumni Members could have first consideration in times of employment in the University and Alumni could have some protocols during admissions.

In addition to supporting the organisation of the National Congress, he said the Management would soon hand over a furnished space on campus to the Association as its offices.

Hundreds of enthusiastic people, including heavy-weights in academia, politicians, and others from varied career persuasions, thronged the New Auditorium of the University for the first National Congress, climaxing with a peaceful election of a five-member national pioneer executive of the Association.

Also present at the National Congress were former Ghana High Commissioner to South Africa, His Excellency, George Ayisi Boateng, an alumnus; the Dean of Graduate Studies, AAMUSTED, Professor Stephen Jobson Mitchual, represented the Pro Vice-Chancellor of AAMUSTED, Prof. James K. Kagya-Agyemang, as Chairman of the Congress. There were several management members, including the Acting Registrar, Mr. Michael Kofi Adu, Deans of Faculty, Heads of Department, and teaching and non-teaching staff of AAMUSTED.

Per article three (3) of the Association’s Constitution, all Postgraduate, Graduate, Diploma, and Certificate holders, who completed academic programmes at the University (including KATTC, ST. ANDREWS COLLEGE, UCEW-K, UCEW-M, COLTEK, CAGRIC, AAMUSTED, and affiliate institutions, as listed and recognised by the University), are eligible to join as members.